Corporate Clients of This Interactive Experience Include:

You may not meet in person like you used to. But you can still give your group a real experience they actually feel excited about.

Stop thinking because your corporate event is on Zoom or Microsoft Teams, it has to be second best. Stop it, all of you.

You can read 100+ reviews of interactive magician Jon Finch here.

Everyone had an absolute blast! 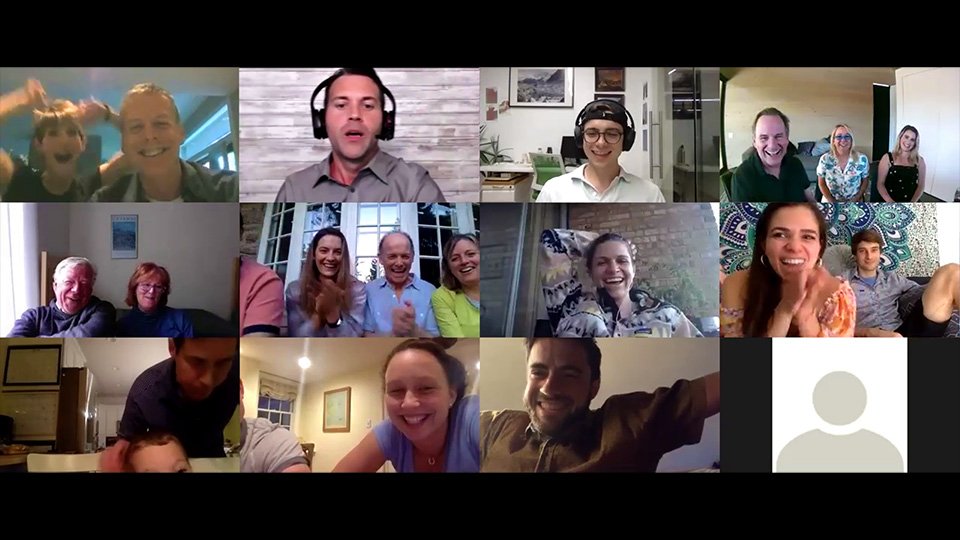 Ready to put on the virtual event of the year?

⬇️ fill this out for a quick quote ⬇️

You Can Melt Zoom Fatigue like Butter in A Microwave 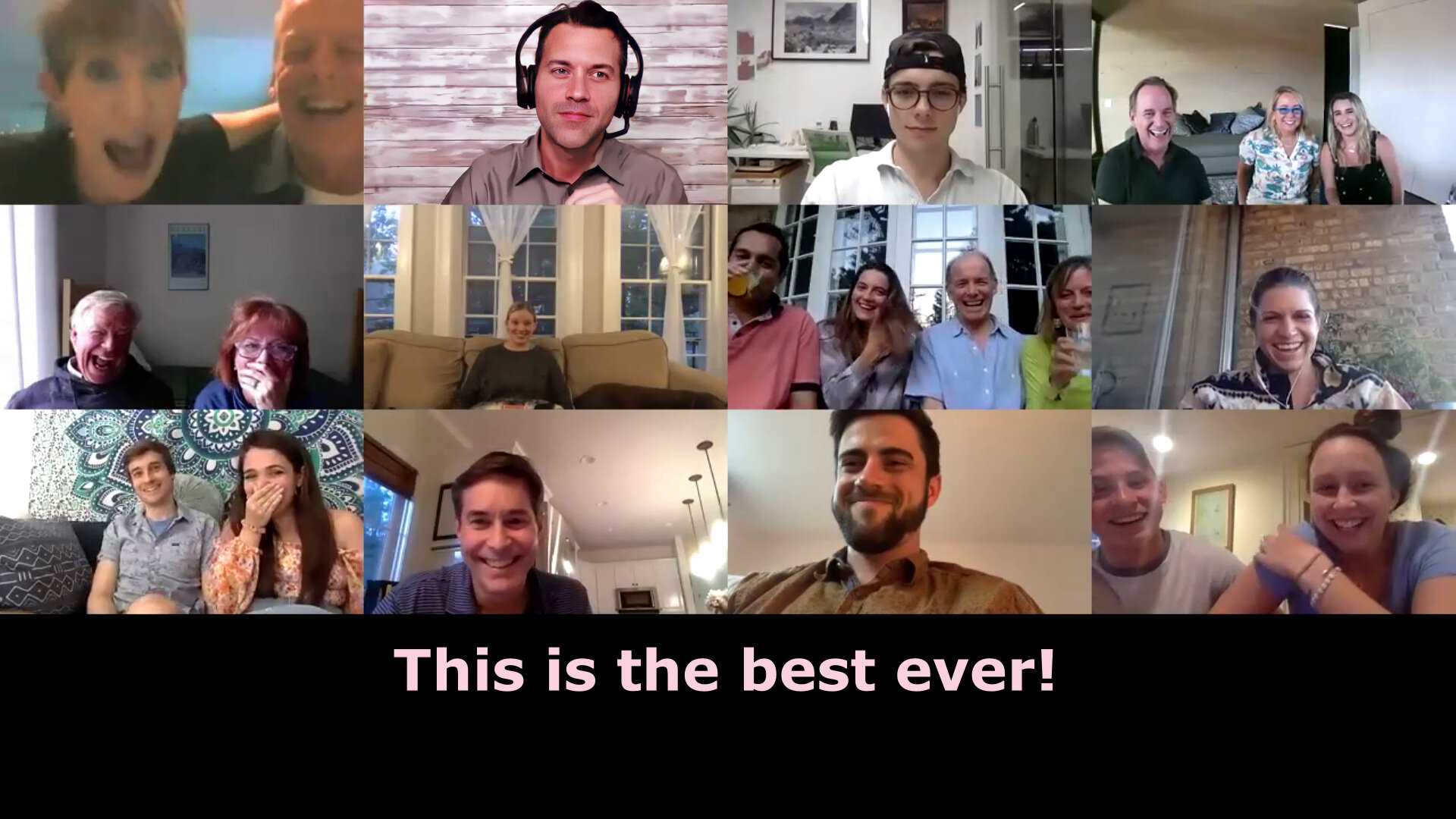 &nbsp&nbsp&nbsp&nbsp In fact, you can get even the cynics, skeptics, and introverts rising up in their seats in amazement. What if they started shouting out, “What is HAPPENING?!” Jon Finch can get your group out of their shells and laughing out loud. Then have them thanking you even months later for creating such a fun virtual corporate event they won't ever forget.

Everyone is still talking about it today. It was a very nice break from the usual Zoom meetings! I haven't seen the group laugh that hard in years.

&nbsp&nbsp&nbsp&nbsp When we don't meet in the same room — when your colleagues and friends are just a small face in a square on your screen — feeling socially connected can be a challenge. Whether it's the pandemic keeping your remote team apart, it's hard to find opportunities to stay connected.

So what's the magic formula?

Jon Finch’s virtual entertainment is an opportunity for your audience members to know one another on a much deeper level than a Zoom room usually affords. 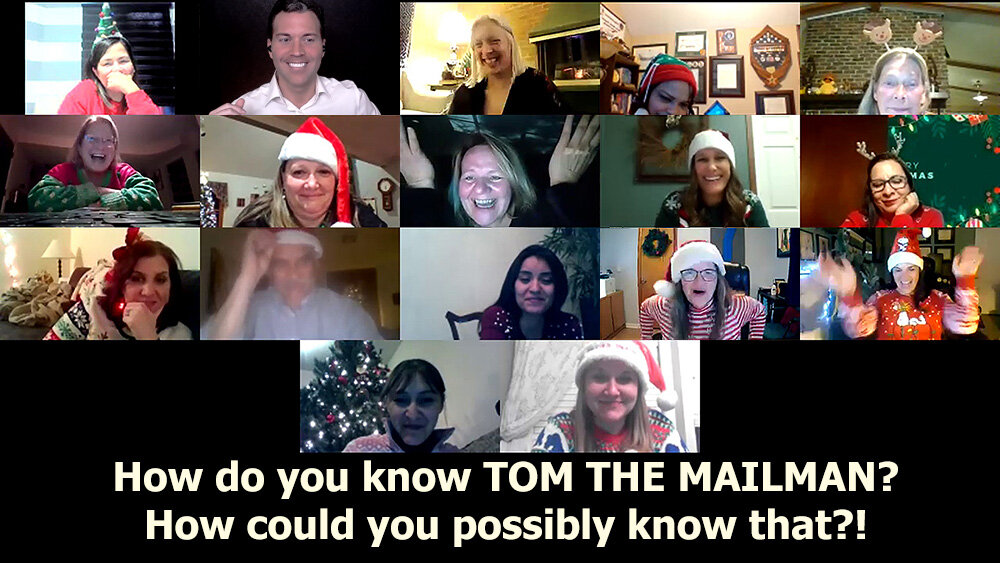 Real Magic for An Unreal Event

When you sit together in the audience at a Jon Finch online show, something magical happens — and not just his routines. Unlike passively watching a keynote or even answering questions as part of an online game like virtual trivia or scavenger hunt, experiencing Jon Finch’s virtual magic creates a bond between everyone in the audience. You’ve been through something magical together. Everyone leaves feeling deeply connected with each other.

That feeling of connection lasts long after the show is over.

Because not only do your remote team members feel this connection with one another, they feel connected to your company or organization. That’s the trick YOU have up your sleeve when you bring Jon’s amazing art into your meeting. By bringing in Jon Finch, you bring people together. 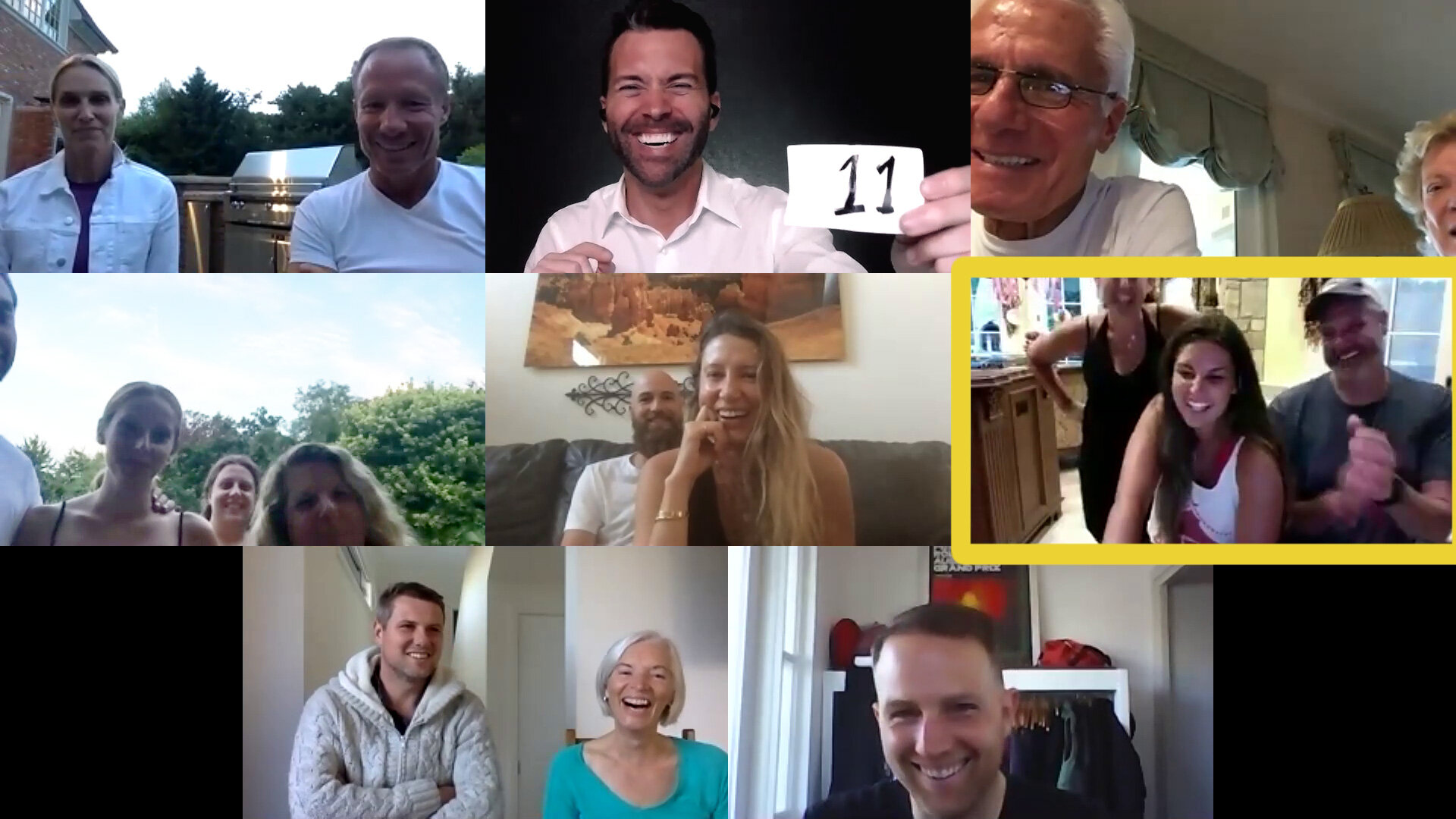 How does it work?

Jon Finch’s virtual shows are a mix of high-octane, fully-interactive (and HR-friendly!) mind reading routines. Depending on the length of the show, he will blend fast-paced tricks that wow, with deeper, more in-depth routines that leave everyone on the edge of their seats and captivated for the entire time. Participants will laugh until their stomachs ache and wonder how Jon does it — all while understanding that, as interacting audience members, they themselves are an essential part of the magic!

Jon had the entire audience in awe the whole show! He kept everyone engaged and on the edge of their seats.

I had executives calling me after the show saying how much fun they had and how impressed they were.

Jon asks an audience member to grab her phone and go to the contacts, then scroll up and down and stop anywhere she wants, holding her finger over a name. But not saying it out loud. Immediately, Jon tells her the name she’s looking at.

She drops her phone.

Everyone’s mouth falls open in disbelief, some even believe she’s in on the act!

&nbsp&nbsp&nbsp&nbsp When you hire a seasoned magic professional for your virtual event entertainment, you excite your team again about why they all enjoy working together. You remind them just because you’re not physically in person, you’re still all in this together working towards the same thing.

You're still connected as a team. 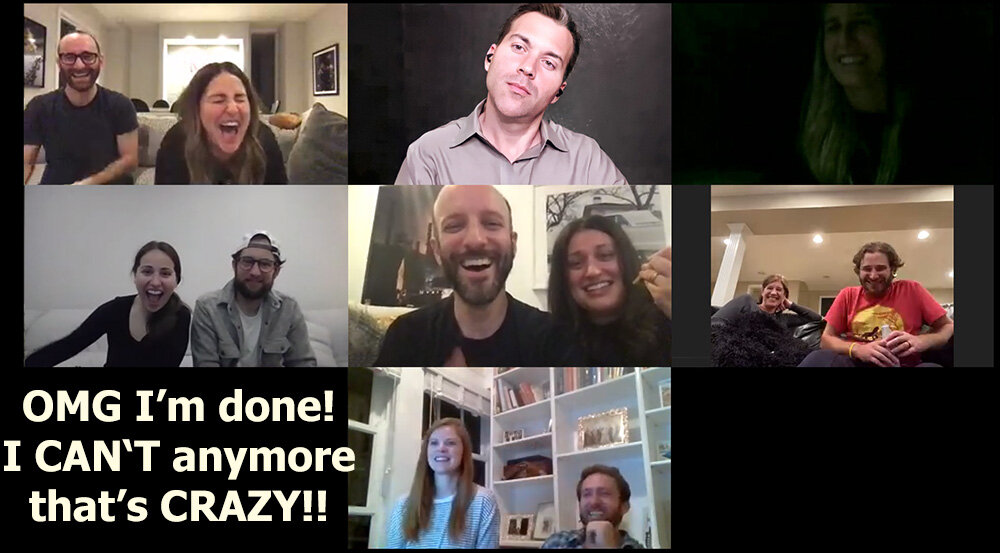 Jon Finch can bring your meeting to life!

&nbsp&nbsp&nbsp&nbsp Virtual magic is one of the most extraordinary things you can experience. Jon Finch performs his incredible feats right in front of your face, close up. If there are 80 people in your group, everyone will experience the magic — it's like they were standing onstage looking over his shoulder! The best thing about virtual performances: anyone can participate in the magic because no matter how many attendees you’re inviting, every person feels like a star when they're performing together.

With Jon Finch's amazing show, you can feel like a part of the action no matter where in the world you are. The online experience is like being there without actually needing to be anywhere at all!

Take a scroll down through this chat after Nickelodeon’s virtual team building event with Jon Finch. 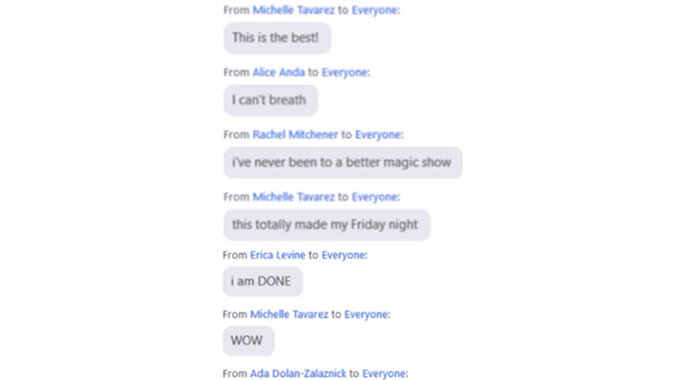 The Best Entertainment for A Corporate Event

There’s a reason Jon Finch is one of the busiest entertainers in the world. He performs his tricks virtually so anyone can see the miniature miracles from any location – even if there are 200 people in attendance at the happy hours or the virtual holiday party.

What IS this wizardry?! Is it really magic?

Jon Finch does NOT need camera tricks, audience plants (stooges), or special effects, to make the fantastic become real. Regardless of whether a pandemic strikes, Jon Finch's special gift is a valuable device for bringing people together. His wizardry will leave your real life jaw on the virtual show floor. It's not just his interactive virtual shows for corporate audiences. Jon Finch's personality melts Zoom fatigue like mercury in a microwave!

READY TO BLOW THEIR MINDS?
GET IN TOUCH NOW

You get every person engaged from the first minute.

Jon Finch has mastered online attention grabbing like I have never seen.

This was a group of very skeptical professionals presenting to zoom audiences for a living. I know they learned something, I certainly did!

Your mind is his canvas.

You watch the odd man from a thousand miles away. But you can see he’s looking into your eyes as he waves over his chest. You can feel the spot he is pointing at as if a string attached to your finger was being pulled from across the room. He rolls up his sleeve. He takes off one shoe. But you don't know what magic trick is behind it all. Not until he addresses your colleague and asks for an envelope in which she had already written any object she could have chosen.

Is this something you’d expect in a magic show?

Not even the staunchest skeptic in your group thinks it could be a magic trick. And the artist of astonishment who had performed this mental miracle was using a new type of magic.

He knew your thoughts.

He read your mind. This is real magic for a virtual celebration.

The man who made this trick is a Master Mentalist called Jon Finch. Currently he’s the only performer who uses this mind reading technique.

He invented it just by thinking.

The secret behind professional virtual mentalist Finch’s ability? He’s able to mentally view thoughts from across the globe. And the virtual virtuoso can do it all during the show. From his ordinary mind ;).

Who wants a sleight-of-hand card trick when you can have sleight of mind?

His real magic performance is impressive by itself. But what makes this a magical breakthrough is he can do it again and again. People who have no idea of how he does his magic and mentalism. Master Mentalist Jon Finch developed a system making this mental stunt so convincing it leaves even top computer specialists, psychologists, and other mentalists flummoxed!

YOUR TEAM WILL LOVE YOU!

Everyone had fun and Jon picked on the right people :)  People are still talking about it and how he did it.

Our team absolutely loved having Jon Finch perform at our Zoom event, they still haven't stopped talking about how much fun they had!

Wow, Jon joined our virtual happy hour and my mind has been reeling since, with the amazing performance and predictions from yesterday. People are messaging me this morning, as our minds are blown!

We'll be talking about Jon with all our family and friends!

His show was absolutely insane.

Gonna send Jon’s name out to a few people internally so I can share with others that “OMG he guessed the card THROUGH THE COMPUTER screen what the hell is happening!”

His show was a hit with the team for sure and I’m gonna spend a lot of time trying to figure out how exactly Jon Finch does this.

The virtual show was incredible and had my family & guests laughing out loud and trying to figure out how he knew after the show. I loved it, was the perfect fit! Absolutely great.

That was SUCH a fun party and now I totally believe in magic.

“We booked Jon to perform magic and mentalism at our virtual happy hour last night! Jon presented incredible entertainment for our clients a week-or-so ago. We’re still talking about how much fun we had! I appreciate how easy Jon made the whole booking process, and I’m hoping we can have him back in the future.”